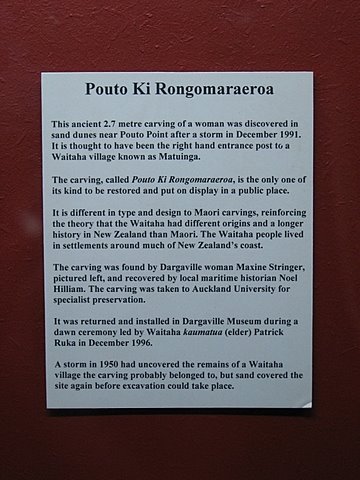 Over a thousand years ago my ancester Kupe voyaged from Hawaiki to Aotearoa in his waka to settle. Other waka came too which laid the foundations for the Maori Tribes European settlers would much later encounter. My Iwi is Ngaitahu (from the South Island or Pounamu) through Tei Tei who was a daughter of Paahi a brother to the sacred chief(Ariki) Te Maiharanui. Tei Tei married William Issac Haberfield in 1837 at Moeraki and my family through my mother's father descend from their eldest daughter Mere P. I am proud of my heritage. This carving on display at the Dargaville Museum is called Poutu Ki Rongomaraeroa. It was found at Poutu in 1991 and attributed to the Waitaha People. On a previous visit with Lisa aka Timespanner we had both viewed this carving and had asked the Curator questions about it. This carving hasn't been carbon dated to verify its age. Whatever story lies behind it this is a beautiful piece of art from the past. The image is a stiched together one the file size doesn't do the carving true justice. Last time it disturbed me greatly now I see it in a different light.

An update since this post was done. Maps from Reading the Maps raised the issue of the pseudo history behind this carving and the manner in which it was displayed. The carving was displayed lying down which caused me concern at the time. No carving should ever be displayed in such a manner. Thanks to Maps the Dargaville Museum have withdrawn the "history" and are making steps to ascertain the carvings true provenance. Well done Dargaville Museum for at last taking heed of well informed and very valid opinions.
Email Post
Labels: carving Dargaville Museum maori art poutu Poutu Ki Rongomaraeroa

Jayne said…
That's amazingly beautiful and so wonderful that it's in such great condition.
February 13, 2009 at 1:06 PM

Liz said…
Hi Jayne took me long enough to get back here! It's gorgeous but I'm skeptical when it comes to the claim of the Waitaha. It needs to be researched further.
February 26, 2009 at 5:01 AM

jt said…
It's now 2016 and I visited the Dargaville museum for the first time at 53. I am Tangata whenua of Pouto (as it spelt today and should be Poutu) and was told not to take photos in the Maori arts section. As soon as I entered into their maori arts room I soon realised I was surrounded by my tupunas and when I saw the Pou I wept I cried and my whole body got goose bumps. I had no idea about the korero behind her and now know she needs to go back to her home in Pouto and stand tall at Waikaretu Marae.
January 18, 2016 at 8:43 AM

jt said…
Please email me if you woulld like a better picture of her to put up on your site. Thankyou
Marlene West
January 18, 2016 at 8:46 AM

That post was written quite some years back. I've been back to the Dargaville Museum several times since that photo was taken. I just haven't got around to putting up new images of the Pou. Personally I feel the Pou should never have been disturbed and left where it was found. Unfortunately due to the attitudes at the time the Pou was removed from its site during the 1980s and placed in the museum with the ridiculous "Waitaha" myth attached to it. Dr Scott Hamilton raised the issue of the Pou's provenance sometime ago. Since then Dargaville Museum have changed the way Iwi artifacts are treated. I've since asked about the Pou and my own concerns of how it was being displayed. I've been advised things are in process to have the Pou properly displayed in a special case. I have to agree that it should be at the marae. I know how I would feel if my ancestors taonga had been disturbed. When I first saw the Pou I was badly affected. Something told me deep inside it wasn't right. I hope one day the pou returns to iwi.
January 18, 2016 at 9:21 AM