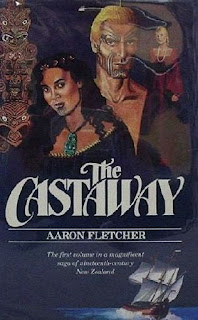 Another book review - this time it's The Castaway by Aaron Fletcher - another one from the Maungaturoto Library.

Australia and its surrounding islands were settled by colonists from the British Isles in the late eighteenth and early nineteenth centuries, beginning with a penal colony established on the site of the modern city of Sydney in 1788. Tasmania (known as Van Diemen's Land in the eighteenth and nineteenth centuries and now part of Australia) was also established as a British penal colony in the early 1800s. Transportation of convicts continued through the mid-1800s. Many free immigrants also settled in Australia and Tasmania, especially during the 1850s when they were attracted by the wool industry and a series of gold rushes.

The first Europeans to settle in New Zealand were Christian missionaries who came in the 1800s to convert the native Maori. The Maori initially welcomed European settlers, but as more and more flooded in, displacing the Maori, conflicts erupted into the Land Wars of the 1860s and 1870s. Native Australians, dubbed Aborigines by European settlers, did not fare well as colonization spread, but modern novelists recognize the positive aspects of their culture.

My personal review is that I really enjoyed this book. I've been researching my family tree for a while now and found it interesting to know that my immigrant ancestors could have or would have lived similarly in early New Zealand. I liked reading how the main character William Pollard, an escaped convict escaped from the ship he was being transported on and swam to the nearby Bay of Islands - back then was called Kororareka, met up with the local Maoris and married one of them. Although this is a fictional novel the author captures the history well.

This is definitely worth reading and is one of my favourites - I highly recommend it.

Timespanner said…
I know that Historical Novels site is trying to just give a broad-brush summary of NZ history as a background to the novels, but -- the missionaries from CMS and the Catholics weren't the first Europeans to settle in the country. The first settlements were those of sealers and whalers from c.1800 in the South Island, not to mention Europeans who intermarried with local Maori. The Land Wars started in the 1840s, not the 1860s (there was just a relatively quiet time in between). And further down the page where it referred to the Tarawera eruption coming at the end of the Victorian era? Said era had another 15 years to go after the volcano blew its top.
January 24, 2010 at 12:20 PM

Amy said…
you're right Lisa, there was so much more I wanted to say about this book but am a bit limited in trying to explain the whole thing. I think at the end of the day it is only a novel and not a true story but interesting nonetheless.
January 24, 2010 at 1:56 PM

Liz said…
Too right Lisa I descend from one of those very early pre-1840 settlers as you know who married a neice of Te Maiharanui a Kaitahu Ariki.
January 24, 2010 at 2:17 PM

Timespanner said…
Hi Amy -- I wasn't critiquing the history behind the novel (from your summary, it sounds good). Historical novels are always allowed leeway when it comes to history. I just noticed what the website said, which claimed to supply a summary of Aussie & Kiwi history. A bit out in places. ;-)
January 25, 2010 at 3:05 PM