On the morning of Wednesday September 29th 1909, a man named George Allwood awoke in his bed and told his wife 'he had to go and defend himself'. Known locally as "Rocky" George was then aged at 60 years old, and only a week before, been released from the Auckland Lunatic Hospital. Allwood had been complaining of hearing 'voices in his head,' and had been committed for treatment. He returned home to his residence in Dargaville, and it appears he seemed to be stable. Until, that fateful morning, when he rose out of his bed took up a cane blade, and left his home to go across the street to enter the home of Phoebe Sydney Kjer, then aged 42 years. 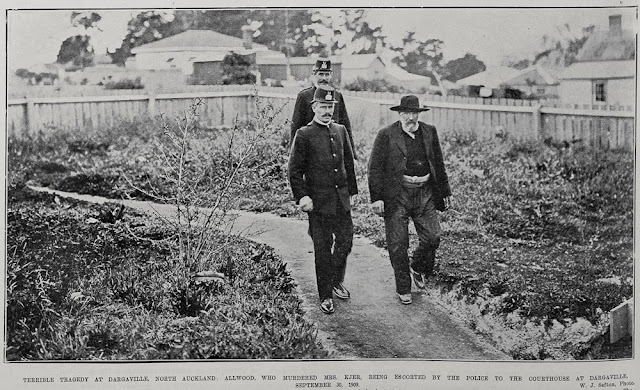 According to witnesses, Allwood  had chased Mrs Kjer out of her home,still in her night dress out onto the street where he struck her down with the cane blade. Mrs Kjer died at the scene from her injuries. Allwood was arrested and was brought before the Coroner's court. According the New Zealand Herald (30 September 1909) Allwood had nothing to say, when he was asked if he wanted to cross-examine any of the witnesses to the crime. He had a previous history of being a well known identity around Dargaville, and had been appointed a night watchman by local Dargaville businesses during the previous two years. In April of 1908, Allwood showed signs of mental illness, and was later committed for treatment at the mental hospital.

Prisoner is a tall, powerfully-built man, weighing 15 stone, and is 60 years of age. He is an old identity on the Wairoa, having worked for years in bushes, and is commonly known as Rocky. Two years ago he was appointed night watchman by Dargaville business firms, end was regarded as a most trustworthy man. In April last he developed signs of insanity, and frequently stated that he heard voices which it was imperative he should obey. As his malady increased medical advice was obtained, and his removal to the Mental Hospital was ordered. On that occasion some eight men were required to overpower him. He was, as before stated, discharged from Avondale last week, and returned to his home.

According to the police, Allwood initally resisted arrest. Upon realising the constables intended on entering his home, he opened the door and gave himself up peacefully for arrest. The police noted Allwood did not need to be handcuffed. The medical evidence provided evidence of the injuries. Mrs Kjer had three wounds inflicted from the force of the cane blade. One blow had subsequently resulted in her neck being broken. Allwood was considered fit for trial and was remanded into custody to face a charge of murder in the Supreme Court. Phoebe Sydney Kjer, the victim was laid to rest after a service held at the Anglican Church in Dargaville on 1 October 1909. George Allwood never made it to trial. Held in custody at the Auckland Lunatic Asylum, Allwood died from heart failure after an illness lasting several days on 23 November 1909. We can only assume that George Allwood was also laid to rest in the cemetery at Dargaville.

Liz said…
I wondered as well if that was what the poor man had too. Sad outcome for Mrs Kjer who ended up being the victim and for George as well.
August 2, 2013 at 8:41 PM