The Ngapuhi Nursing Sisters of Mercy (1901) 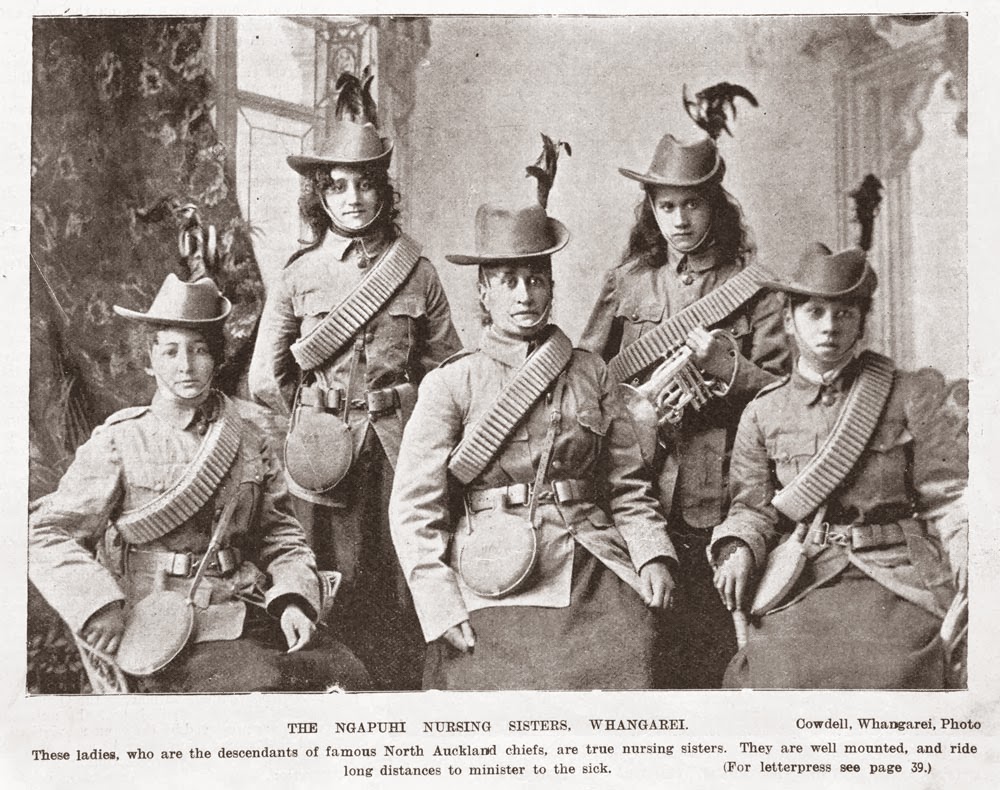 While I was researching on another subject, I came across this image of these Ngapuhi descended women dressed in uniforms. These woman called themselves The Ngapuhi Sisters of Mercy. Unfortunately, the New Zealand Herald article of the period gave no names for these five incredible women. The woman were nursing sisters who travelled across the Northland area tending to the sick. It appears they had formed in answer to the Boer War situation, and had adopted similiar uniforms the soldiers wore in the South African campaign. Other than this one report, also repeated in other publications of the same time period, no other information about these women has been found. Who were they? If anyone can help provide any further information on these five women please contact me. I would like to know more about them, and their story. Somewhere hidden is their story.

A society has been formed by a number of halfcaste ladies who are the descendants of Ngapuhi chiefs of the North of New Zealand (writes our Whangarei corespondent). They call themselves the Ngapuhi sisters of mercy, and are qualifying themselves for nurses in the field, so that if our volunteers are called into active service they may bo able to tend the sick and wounded. They are well mounted, and it is needless to say. are all good horsewomen. Mr. Bridgeman: has been kindly giving them lectures on first aid. Their uniform is of khaki, the same as the New Zealand mounted volunteers, with skirt of same colour

Update: Thanks to Ellen-Jane Waetford who wrote on the farm facebook page we now have the names of these five women. Ellen-Jane writes " in the book Standing In The Sunshine by Sandra Coney published 1993, there is an item on page 92 about the Ngapuhi Sisters. Their names are: Sergeant A Calkin, Bugler M Kaire, Sergeant-Major C Calkin, Captain Kingi, and Lieutenant G Waetford." Thank you again Ellen-Jane for kindly providing this important information.
Email Post
Labels: 1901 Boer War Maori Maori Women Ngapuhi nurses nursing whangarei

Unknown said…
Very interesting article. The two Calkin ladies are my whanau. I would be interested in reading more about them.Is there a further link?

Liz said…
Unfortunately that's all the information that could be found Darren. If I find more then I'll add onto the post
June 11, 2017 at 2:53 PM