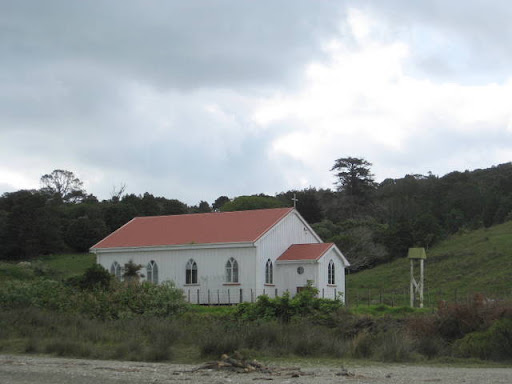 Standing on the shores of this silent place it was hard to imagine that once, over a century before, here at Tanoa was a hub of activity. The settlement of an Uriohau Chief Arama Karaka was here and later the Wesleyan missionary Reverend William Gittos.* So much history to be told . What went on there during those early years that shaped the lives of the generations that have followed since. It is what stands there now as silent perhaps, an almost a shadowed testament to those events of the early days of settlement.

Tanoa was once known by the name of Kakaraea and just beyond Oahau, now called Batley.

In 1874 on the shores of Kakaraea a fine gothic-style church made of the mighty kauri was built. Its siting had a particular significance. According to Dick Scott in his book "Seven Lives on Salt River" the site was Wahi Tapu and for Arama Karaka it held a personal concern. Having converted to christianity he had also abandoned his father's name Haututu, to take the name Adam Clark and the doing came the rejection of the tapu surrounding his father's death. Dick Scott recorded the following:

"Haututu had been killed defending his land from Ngapuhi muskets in 1825. His body had been taken by canoe down the Otamatea to be cooked and eaten at his own Kakaraea kainga. A big pohutukawa marked this especially tapu ground. The missionary (William Gittos) set out to destroy the tapu by employing Europeans to build a church on the site. A handsome building with great kauri beams supporting a high vaulted roof, it became known as the "Cathedral Church of Gittos". At first Arama Karaka was afraid to enter it and violate his father's memory, but Gittos persuaded him with a prayer".

After much research and finding different years 1875 and 1877 for the construction of the Gittos Church I finally found an article from the Daily Southern Cross dated 17th April 1874.

Opening of the Wesleyan Church at Kaipara

"The opening of this new Church took place on Sunday March 29th. The building is of wood, built in the gothic style. It is fifty feet in length, by thirty feet in breadth, and provides sitting accommodation for about three hundred worshippers. It is proportionately of a very lofty character, the matter of ventilation having received due consideration, a requisite quality in any church where the natives worship. We were glad to notice there was no pulpit, but a plain reading desk inside the communion rail.....Mr Symonds* was the architect and builder." 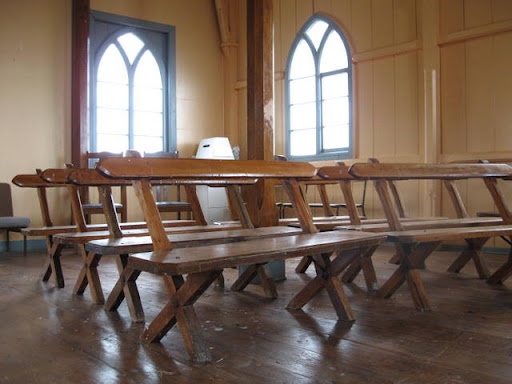 Cathedral no longer. Time took its toll on the grand gothic facade finally succumbing to rot and a high wind the high vaulted roof structure in the end was removed for safety reasons. The church originally faced the shoreline. According to local Iwi sources the building was turned around and was shortened. What remains is a plain unassuming building flanked by old gravestones, its bell now erected alongside no longer tolling the call to morning service. Birds fly in and out of the gaps left behind from long since broken windows - a sad testament to a glorious past. Somewhere there are plans to have the building conserved. Let's just hope it's not too far into the near distant future.

* J. Symonds who had a timber mill at Whakapirau (further research required)
* Rev William Gittos was the son of Benjamin Gittos of the Gittos Tannery 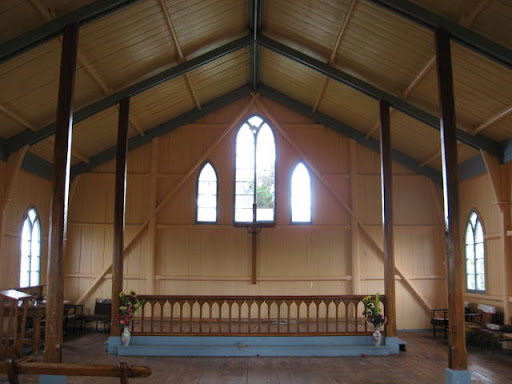 Amy said…
That's really sad that's been let go so badly, buildings like this are historic and should be kept as they were 100 years ago. They're an important reminder of NZ's history.
December 12, 2008 at 8:04 AM

Yes I know this is a sore point with me. Going to contact the Council and find out what they are doing about the conservation of the church. There is a plan somewhere.
December 12, 2008 at 8:11 AM

Timespanner said…
The conservation plan was apparently funded by Kaipara District Council as part of their 2006 Heritage Assistance Fund round.

If the plan was completed, it would be either with the current property owners, or the Northland office of NZHPT (or both). You could try emailing NZHPT to enquire.
December 12, 2008 at 9:16 AM

Liz said…
Thanks Ice. I'll grab the link and look into it. Also have to email the archives re other project. Do that today. Too much going on last few days mutter.
December 12, 2008 at 9:25 AM

Timespanner said…
Understandable. But remember, history is not a rush-job, so don't sweat about a delay in following stuff up. It's all a bit like Mainland cheese ...
December 12, 2008 at 11:54 AM

Started process. With Christmas close I guess answers will be long in their coming. Heh we'll get there. This one took a year of research as far as this article went. All done - mostly. I'll update it again later on and put in more links.
December 12, 2008 at 12:31 PM

Anonymous said…
What a find your information has been for me. I spent the most cherished moments of my childhood in Tanoa visiting my favourite uncle who had a farm "up the beach" where the old school house stood. My memories of this church and this area were so powerful that last month (Jan 2009) I was drawn back to the area and spent a night in our campervan outside the church grounds. I met a man "Bill" who told me some history and who had known my uncle - I was just stoked to find the Church still standing and ... even more stoked to hear that it may be going to get preserved - Tanoa, the farm, the school house (now burnt) will always be sacred space for me - anyone who has more history of Tanoa, especially the school house where I played as a child for hours (my uncles chooks roosted there) I would love to hear from them.
Karen, now Western Australia
healingwithhorses@hotmail.com

Anonymous said…
back again - I would welcome any info or story exchange on the Tanoa area
February 27, 2009 at 7:06 AM

I am coming back not terribly important to anyone but me probably but wanting to explore the history of Tanoa and its surronds with a little more knowledge than the last time. Also aware that I probably blundered in this january without thinking and wanting to speak to anyone in the area who can tell me how I can explore the area with respect to local people and culture. I am particularly interested in how I might find out the owners of the property my uncle lived on that included the Tanoa school house so that I might explore some more with their permission. My uncle Andy (McCarthy ... Mac) was on the Rabbit Board for many years and lived a lot of the time in the farm house near the School House. Wanting to touch base with any elders or residents of
Tanoa that might fill me in on local knowlege both Maori and Pakeha. Visiting NZ from the 24th of October to the 6th of September, 31st in Auckland for my mothers birthday but wanting to visit Tanoa for a few days some time around that. Any leads, gratefully recieved
August 23, 2009 at 12:51 AM

otamatea said…
Kiaora from the Otamatea river, I have studied the otamatea river and our church Kakaraea for quite a while, infact im going up to the Albertland museum to tell them about miss spelling the name of our church in their latest calender, they have Kakaraia which is the spelling in the Albertland Book. Its is also important to remember that Paikea Te Hekeua was the Paramount cheif up our River Arama Karaka was his nephew. the old school grounds weregifted for the purpose of education, and actually should have made its way back into our Iwis hands, nevertheless the current owners have done a good job of shore planting, the old church of which I have nearly every photo thats available had a 25 thousand dollar grant from ASB an old Kuia Nan Worthington was instrumental for getting the first part of the grant, and then our own whanu buggered up the 2nd stage by mis managing funds, there are good whanau currently looking at the restoration as we speak, please feel to contact me at otamatea@hotmail.com if you would like more info as I have studied our river for many years, regards Brendon lewis
November 6, 2009 at 12:12 PM

Liz said…
Hi there thanks for that information much appreciated. Yes there seems to be differences in the spellings. Thanks for letting me know
Liz
March 11, 2010 at 6:57 PM

Writer Of The Purple Sage said…
Most interesting reading!
I had a wee chuckle when I read, in the quoted extract "...the matter of ventilation having received due consideration, a requisite quality in any church where the natives worship."
I guess Palmolive Gold hadn't been invented then!
May 2, 2011 at 8:50 AM

Unknown said…
The church at kakaraea has now been refurbished and it looks ataahua.
February 10, 2015 at 6:52 PM