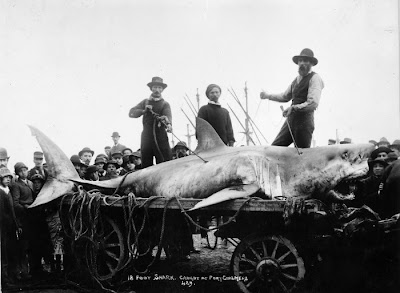 A trip away from Northland History this time. This time a rather fishy tale - a rather large one that occured in Port Chalmers back in 1901. I came across the image in Flickr Commons a while back. Finally I've managed to locate the story behind the image of a large great white shark with its captors standing proudly behind it. The sad part is Great White Sharks are now on the endangered species list. We have them cruising in the Kaipara Harbour near where I live. Years back visiting Shelly Beach near Helensville a young child I still recall seeing a dozen large sharks all dead left to rot on the beach. It was a sign of the times, and also the same year the movie Jaws was released - that was 1976.

A large shark has been prowling about the lower harbour for some time past, and up to Tuesday night evaded all the efforts of the fishermen to take it. However, at nightfall on Tuesday, when Mr John Noble, a well known, lower harbour fisherman, was returning home, he was informed that the monster, some 18ft long, was in the vicinity of  Mr. W. Innes's fishery.  Mr. Noble, who has previously taken several sharks in the Port Chalmers waters, at once manned his boat and went in pursuit, succeeding, after a hard contest, in harpooning the creature off the wharf.

The fish was then towed round to Tunnage's fishery to be hoisted up. Here what might have been a very serious accident occurred, for a number of young and old of both sexes desirous of seeing the shark made their way round to Mr. Tunnage's fishery and took up a position on the landing-stage designed for the reception of fish. In all, the unexpected visitors must have been between 30 and 40.

The landing stage (only intended to receive fish) proved unable to support the weight, and it sank, taking its occupants into deeper water than they eared to encounter. One young lady, seeing the stage was sinking, very pluckily held on to a wire rope stretched above her head, and succeeded in sustaining herself and two friends. Some few bruises were sustained by some of the young people on the stage, but eventually everyone was landed.