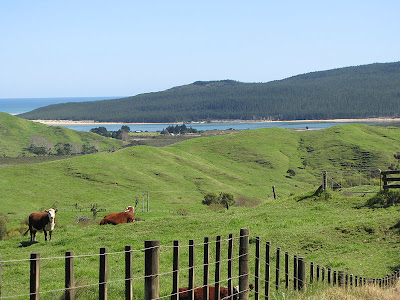 Image Herekino Harbour Sourced: Wikipedia Commons
If anyone ever decides to do a trip of Northland then take the West Coast back down towards Hokianga. The drive is worth it. On the way stop in and check out the settlements around the region. I haven't been to the small settlement of Herekino in 20 years. Like all places on the coast it has had its own stories to tell. I found a few short snippets about a fire bug being in the area. Between the years 1909 -1912 fires were reported including the burning down of the public school, and an alleged attempt to blow up a local resident's house. Little comfort for those living in the area at the time when an alleged arsonist was on the loose. The sadder one was the bursting of a dam which killed one person.
A SCHOOL BURNED.
(Per United Press Association.) November 26. The Inspector of Police has received notification that the public school at Herekino was destroyed by fire last night. The circumstances lead to suspicions of incendiarism.
Wanganui Herald
Sensation at Herekino.
ATTEMPT TO BLOW UP A HOUSE
, July 19
An attempt was made on Sunday night at Herekino to blow up the residence of Mr Powell, a member of the local county council.
Shortly after the family had retired to rest there was an explosion, and one of the rooms was filled with smoke. The inmates heard a horse galloping away. The constable found an  empty treacle tin and a length of fuse under Mr. Powell's bedroom.
The occurrence is supposed to be the work of the fiend who some time ago started the fires in the district and was not captured.
Northern Advocate
SUPPOSED BURGLARY INCENDIARISM
[BY TELEGBAPH— PRESS ASSOCIATION.]  , 22nd April. A gumfields store at Herekino, owned by J. Bergham, was destroyed by fire in circumstances that suggest burglary and incendiarism. The property was uninsured.
Evening Post
BURSTING OF A DAM.
WHANGAREI, November 16
News has been  received at Whangarei that a fresh dam burst yesterday at Herekino. Two Maoris working in the vicinity were caught by the sudden onflow and washed away. One was killed and the other rescued with difficulty, seriously injured.
Ashburton Guardian
Email Post
Labels: dam burst drownings fires Herekino
Location: Herekino, New Zealand