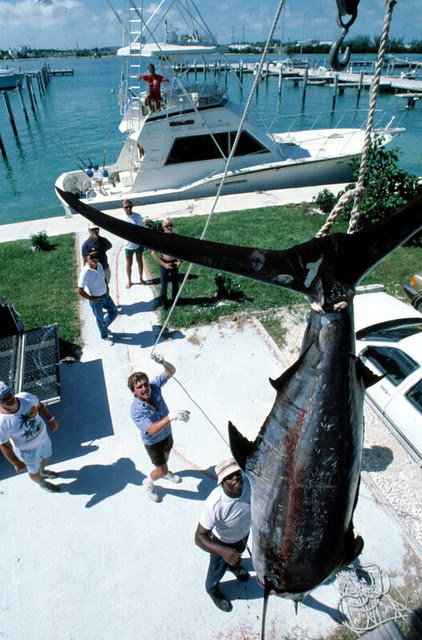 I've always been aware of the big fish stories folks like to tell. This big fish yarn is one that is ture. In February of 1932 the launch Little Jim was heading towards Leigh when she was struck by a large Marlin. The report at the time stated it was a Blue Marlin and noted that the fish stocks were relatively plentiful. These days the East Coast has been badly fished out and affected by increasing population pressuring the resources on the coastline.

Charged by a swordfish at a point several miles south of  last Friday evening, the owned launch Little Jim, a vessel of 40ft., was struck so heavily that the impact caused some alarm. The sword of the fish, which was a striped marlin, penetrated the thick planking of the hull on the port side of the bow above the water-line, and protruded in through the foredeck, the fish breaking its sword.

The Little Jim, which is owned by Mr J. Knaggs, of , was proceeding from the fishing grounds between  and Little Barrier Island to Leigh when the incident occurred. It had passed Tawharanui Point and was standing off at , travelling up the coast to Leigh, when the swordfish struck the boat.

A fresh westerly breeze was blowing at the time and the Little Jim, which was travelling at eight knots, was shaken from stem to stern by a terrific impact after it had dipped into a big wave. The three men on board believed from the force of the blow that the launch had encountered a large log or some submerged obstacle.

The launch was stopped instantly in the choppy sea in order that an inspection for damage could he made. No leakage was detected, and Mr Knaggs then made his way to the bows to conduct an examination by means of a torch. He was astounded to see the end of a swordfish's sword protruding 8in. through the foredeck, which had been opened up for about lft.

On looking over the port gunwale Mr Knaggs saw that the sword had entered the hull about 15in. or 13in. above the waterline. It had passed through two thicknesses of stout planking in the hull and. the foredeck.

The fish had broken clear and it was not sighted by those on board. The hull had been broken for about 2ft. It is considered that the launch would have been in serious danger of filling and sinking had it not dipped into the wave and in that way been struck by the swordfish above the waterline.

An examination of the sword when the vessel arrived at Leigh led to the conclusion that the fish was a striped marlin and probably weighed about 4001b. Several men were occupied for half an hour in removing the sword from the launch, which will require four new planks to repair the damage.

Swordfish are fairly plentiful on the coast where the incident occurred —Herald.