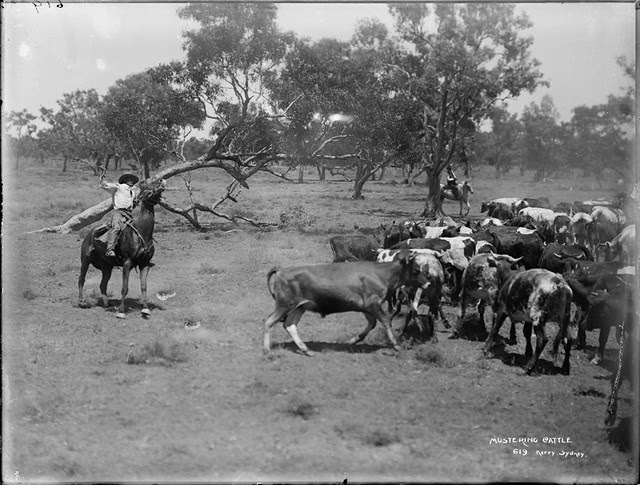 A few years back when I was driving down the back roads of Pakiri, I came across an old stockman leading his clydesdale cross gelding down along the gravel road. He paid me no heed of course as I passed on by. I slowed a while, just take in that last long glimpse of an era long gone by. No more do the stockman drive cattle down the long roads. It's cattle trucks these days and diesel fumes rising on the way. There's only one place the cattle head and that's for the works these days. The back roads are slowly but surely vanishing and giving way to tarseal. Over time the dust will cease to rise whenever a vehicle goes by. If you ever see such a sight then keep in strong in your memory. It's a moment in time that will be lost if we don't remember. On thinking about this I came across an old poem written in the Otago Witness from December of 1895. Have a read it's worth the time.

And now I'm here, and all alone, beside the dear old home,
The walls have long been, crumbled to the ground,
The gum trees still are standing, the currant flowers in bloom,
And all the place is full of silvery sound.
The chimney — why, here's the name,
I remember it quite well,
It's a little indistinct and hard to see,
There's a little piece of " H." left and a part of " WL,"
And it bears the date of eighteen sixty-three.

I'm sitting near the stockyard rails, where years and years ago
We used to have so many fearless rides
Yarding up the cattle that bolted to and fro
With a horse that never wanted for his strides
Dingo Joe the horse was named, a lovely wiry bay,
His honest bones are lying over here.
We got a little careless, and the mob broke straight away ;
While turning Joe got ripped up by a steer.
We tried our best to pull him round ; he never quite got well ;
He teemed to have a swelliug in the girth,
And one bright summer morning he gave a groan and fell,
With heavy thud he tumbled to the earth.
We buried him 'neath the gum tree there, though not without some tears,
All except his polished shoes and hide ;
I carved a little sentence with a blade of broken shears,
"Dingo Joe I never more will ride."

It doesn't seem the same old place, yet there's the rotten rails
That Jack and I once sledged from Bushy Mound.
Some of them are standing still, just hanging by the nails,
And some are fast embedded in the gronnd.
The day we cut that gatepost down to make that crushing pen
We had a stand-up battle with a boar,
The dogs our only weapons, but they fought like tigers then-
Old Captain Cook got quite enough and more.

Yonder shines the mossy loom with slope and fleecy ledge,
Where the cattle in the early mom were seen,
And there's the little kauri spur above the river's edge,
With every nook bedecked with ivy preen.
'Twas lovely in those hilltops, where 'tis patted down with rain.
To ramble half knee deep in mountain grass,
Or sit on old manuka stumps, and coo-e down the plain,
And listen for the echo in the pass.

Only can the stockman tell the pleasure that we breast
Riding up the ranges strange and steep,
Ringing out the stockwhips on the lonely, piercing crest  Boulders rolling from the horses' feet
O'er some outlandish slope or rocky-pillar'd run,
Woodland music sounding low and long ;
The valleys down beneath  gleaming in the sun.
The flitting birds above us full of song.
What times we used to spend in dells, watching the sheep o'erhead
Leaping over pillar, rock, and mound
And we among the raupo sticks or wiry bracken bed
List'ning to tbe bell-bird's silvery sound.

And then we'd rise and scramble up the weatherbeaten rocks
That over-looked the sheep downs in the glade ;
I fancy still I see the stock come rolling down in flocks
To seek a little coolness in the shade.

That matagauri ridge beyond was called the camping ground ;
By break of day the stock were on the tramp ;
The frisky lambs would bleat aloud and skip from rock to mound
In little droves while wandering from the camp ;

‘Twas there we turned the buffalo chips we used at home for fuel
With coradi sticks and pest to make them burn ;
And often when the days were long we'd wag away from school
And wander o'er that ridge of matted fern.

The brooklet shine was bright to-day,
the hills look just as green,
The sky still holds its distant smoky tinge.
The ivy on the mimi there is curtained to a screen,
The weeping willows still maintain their fringe.

And there's the house— at least the walls ;
and there's the garden walk
Where we played as boys together, Jack and I;
But now it lies deserted, there's neither noise nor talk.
It seems I've wandered home again to die.
, December 1895. — W. H. F.