The Central Hotel Dargaville Constructed Circa 1901 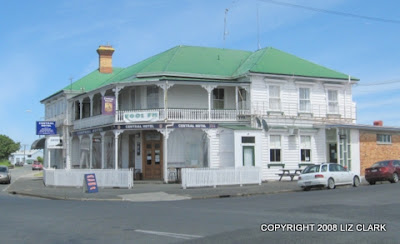 The Central Hotel at Dargaville has always been an iconic building in the township, situated just across from the shores of the Northern Wairoa and the historic band rotunda where ducks gather to take bread from any passing visitors.

Going through one of my many sets of images I have taken of the area I came across some from a trip to the Dargaville Museum a couple of years back. I had taken a photo of the information that came with an old historic photo of the hotel that stated it had been built during the 1870's.

My curiosity got the better of me, so I decided to have a bit of a look into when the construction of the Central Hotel actually was. After a bit of research, I located the hotel which was not constructed in either of the decades indicated by either the Dargaville Museum (noted as 1870's) or the Historic Places Trust register (noted as circa 1890). To be fair both organisations can only go on the information available that was provided to them at the time. A search into Papers Past has now resolved the year of construction for this iconic building.

Originally the first hotel was known as the Kaihu Hotel (circa 1874) until it burned down on the morning of Saturday 16 February 1901. One man James Carmody, a pensioner didn't escape the fire. The victim's bones were discovered amongst the ashes after the fire and an inquest later held to determine the cause of death. The hotel itself was completely destroyed. The licensee of the hotel Edmond Moriarty, had previously been the publican of the Pahi Hotel which coincidently had burned down in September 1897, when he had been in charge of that establishment.

THE DARGAVILLE FIRE.
MAN BURNED TO DEATH
(By Telegraph.—Own Correspondent.)
DARGAVILLE, this clay
During the fire at Moriarty's Kaihu Hotel on Saturday morning a man named James Carmody, a pensioner, was burned to death in his bed. He was found to be missing after the fire, and a search among the ashes by the police resulted in the finding of a number of bones, which Dr. Purchas pronounces part of a human skeleton.

Carmody was very feeble, and had been under the care of Dr. Purchas for some time.
The names of the injured men who were sent to the Auckland Hospital were Barry and Gemmell. Both were badly burned. They were attended to by Dr. Purchas, who ordered their removal to the hospital. Mrs. Moriarty got out by means of the fire escape. which was at the time so hot that she had to let go her hold, but was caught by those below. The servants had narrow escapes.

The cottage adjoining the hotel, occupied by Mr. A. Mills, tailor, was completely destroyed. There was no wind at the-time, or the Masonic Hall and nearly all the adjoining buildings would have been destroyed. Temporary premises will at once be erected. Nothing was saved. An inquest was to be held this afternoon on the remains of James Carmody.

Prolific Auckland based Architect John Currie designed the new hotel and had advertised for tenders for the erection of the new replacement hotel in March of 1901. Currie was also the architect for the replacement Pahi Hotel (1897) and possibly the Maungaturoto Hotel (1902). He had a strong association with the Nathan family, and also with brewer Moss Davis the owner of Hancock & Co for whom he had designed the Pahi Hotel.

Edmond Moriarty was granted a license renewal in June 1903 (Auckland Star 9 June 1903) by the Kaipara Licensing court under the name of 'Central Hotel'. By 1904 the license holder was under the name of Walker. In July the hotel almost again became a victim of a fire. The Thames Star (7 July 1904) reported the fire had been discovered in a downstairs bedroom then occupied by an invalid. Only the efforts of the hotels occupants prevented the hotel from again being burned to the ground.

I'm still researching this building so this post will be updated as more information is found.

The list of Licensees I have so far are:

Stuart Park said…
Hey Liz, this is fantastic, well done. Updating our register is a rather cumbersome process, so it may be a while before the entry changes, but I'll certainly add the correct information to our file. Can you let me have a referenced copy at some stage (the date of the newspaper, for example)? Keep up the good work!

Liz said…
LOL Stuart glad you found them okay. Hope it helps anyway. Still digging away on this building so to speak. The previous establishment had quite an interesting and varied history. I'll send you the timeline when it's complete
November 14, 2011 at 9:58 AM

Wendy said…
Stuart,
Samuel Walker was the Licensee from around May 1903 until June 1906 when he was declared bankrupt (Papers Past - Auckland Star - 14 June 1906 - In Bankruptcy, page 3.) The newspaper reports that trade fell off considerably during the past 12 months There were two police prosecutions brought against him in April. He was convicted on both prosecutions, but the license was not endorsed. Further details in the article. Samuel Walker was previously the Licensee of the Masonic Hotel,Cambridge. He sold out in May 1903 after having been in the hotel for seven months.
July 30, 2012 at 11:01 AM

Unknown said…
Wow this is just awesome... I knew someone had died in the central because I have seen him.I use to work there & live there. What an amazing read.thank you
August 14, 2016 at 9:22 PM

Unknown said…
Wow this is just awesome... I knew someone had died in the central because I have seen him.I use to work there & live there. What an amazing read.thank you
August 14, 2016 at 9:22 PM

annie_tarot said…
Does anyone have any photos of the amazing staircase that leads up to the rooms? I spent a bit of time lovingly polishing those banisters when I worked there... Unknown is correct though. Most of those who worked there have had experiences :)
April 5, 2017 at 10:28 PM

Unknown said…
My parents owned the Hotel in 1991-94 I think I was only young but remember feeling very uneasy walking though the hallway sometimes.
My parents will have lots of photos of the staircase my sister and I use to slide down it...
December 27, 2017 at 10:02 AM