The First Train to run in New Zealand 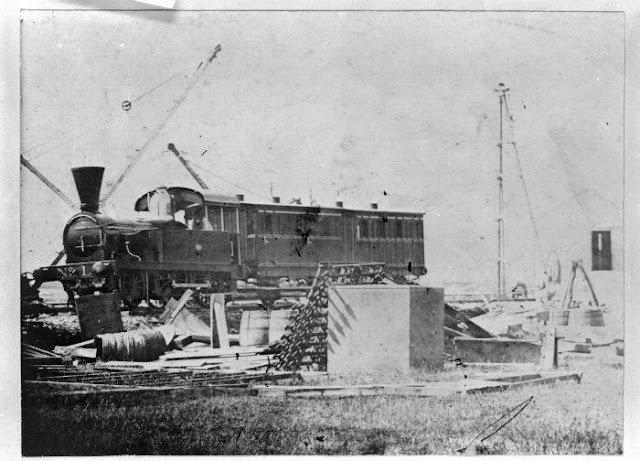 I came across this image when I was searching for something completely unrelated in the ATL Library site. According to the information that was provided with this image this is the first train to run in New Zealand.

'Pilgrim' as she was called pulled the first train in New Zealand between Christchurch and Ferrymead on 1st December 1863 with much ceremony on behalf of the people of Christchurch.

"..Going down the line we found the engine in a state of polished brass and oiliness, and apparently totally indifferent to the excitement which pervaded everything else. We were informed that it is from the workshop of Messrs Slaughter, Gunning and Co., of Bristol, that its power represented about 50 horses, that the action was reversible, so as to render turning unnecessary, that its curious inverted conical funnel was constructed so as to catch the sparks as they fly upwards, and that it could draw with ease a weight of 200 tons

The passenger carriages, of which there are four, two first-class and two second-class, are rather comfortably than expensively fitted they are built of Australian timber, in a very substantial manner, with all the latest improvements, and are from the manufactory of W. Williams, Melbourne. Besides these there are about 30 box and ballast waggons. It is expected that the rolling stock already on hand will meet the requirements of all the traffic which will pass over the line for some time to come, but another engine is on its way from England, and other stock will be procured as soon as necessary.

We were shown through the offices, & c., which contrast in a very favorable manner with some of the Government offices at Christchurch the Indies waiting room is very neat and chastely furnished, although as may be supposed rather small. The engine shed is a commodious building of timber and corrugated iron, the same may he said of the wool shed in short the whole of the arrangements seem eminently adapted to the purposes they are to serve..."

Ferrymead is now a historic heritage railway run the Canterbury Railway Society. You can view their website here.
Email Post

Mapman said…
Nice stuff - historians though will be horrified you've referred to Wikipedia though
December 31, 2011 at 8:52 PM

Liz said…
Well Mapman even I don't completely trust Wikipedia..ever but it's a start any way. I'm sure the evil historians (of which I know some) will soon give me a kick in the rear end for mentioning that dreaded....Wikipedia....by name. Great thing about blogger is that you can soon update it with the rest of the details. Have a good new year
December 31, 2011 at 9:07 PM

Timespanner said…
"Use Wiki with caution and wisdom!" so say the sages. In this case, though, according my here-at-home sources on Canterbury rail history via the Tramway Historical Society, the Wikipedia page isn't wrong. From the opening of the tunnel, the Ferrymead line continued only as a branch and siding line, and finally closed (first in a long, long, sad series in this country of such closures) in December 1877.

Liz said…
So you won't kick my butt. Well that's a relief. Good thing is I did go to Papers Past and looked up the reports of the time period. If Wikipedia had a complete load of...well what I have my paddock after the cows had been there.