Remembering the monument to Opo 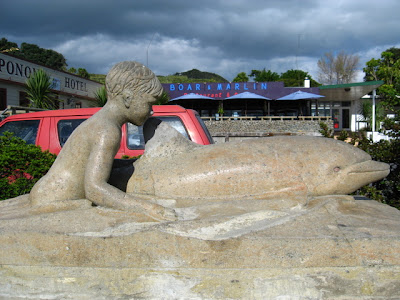 Back in October of 2011 the iconic memorial statue to Opo the Dolphin was a victim of careless vandalism. The head of the boy was broken off and there had been hopes that it could be restored. However it seems the memorial will be replaced. Plans reported in December of 2011 have indicated that it's a possibility that the monument will be replaced with a bronze version. 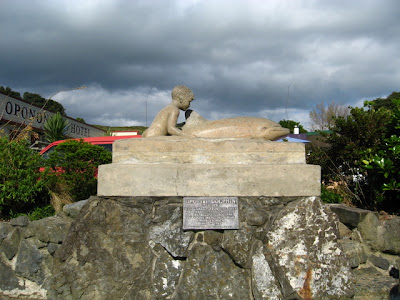 The monument was created in 1960 by significant New Zealand sculptor Russell Clark from Hinuera stone. Over the years since the statue has been one of the most photographed icons in Northland. The images you see here I took in 2009, when I took a trip up to Hokianga with my two children. Then it was still intact. Opo's replacement was mooted because of the statue's fragile and weathered state. I still think it should be repaired and perhaps preserved in a more secure situation. It's far too important to vanish from the Opononi township and end up in storage somewhere. I hope that will not be one of the options being considered. The memorial was a work of  love. I was 9 when I first saw the memorial and my father told me the story of Opo the friendly dolphin who had come to play with the children in the harbour during the summer of 1955/56. Opo was later found dead on some rocks a possible victim of dynamite fishing by careless boaties. The true cause was never established. But she remains as an iconic part of Northland's history. 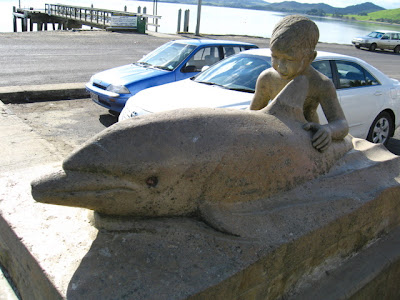 Let's hope that in the near future Opo is restored with her friend the boy back to their original state as best as can be possible. If a new monument is put in place then I hope it reflects the true spirit of the dolphin that captured the hearts and minds of an entire nation and the world if only for a few brief years.
Email Post