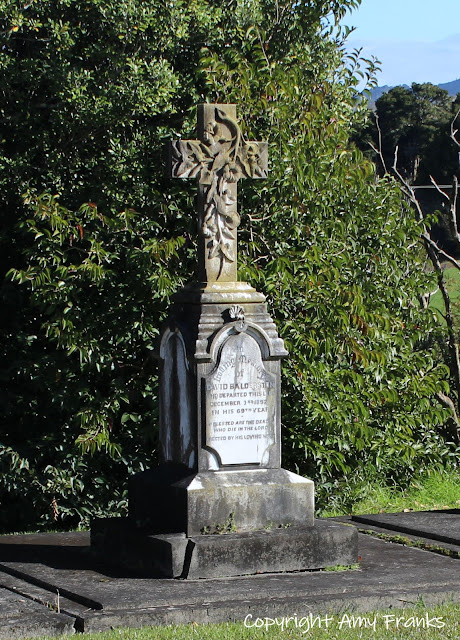 This grave of Mr David Balderston is located In the Hakaru St Michael and All Angels Church cemetery between Kaiwaka and Mangawhai, it was the sculpture on top of the pillar that stood out to me so I decided to do some research into who this gentleman was.

Mr Balderston originally hailed from Glasgow in Scotland and was the only living son of Alexander Balderston. He apparently enjoyed fairly good health until 7 weeks before his sudden death. On the day in question he visited one of the local post offices, not sure if it was the one in Kaiwaka or Mangawhai and upon returning home he complained of pain in his side which was also affecting his arms. Remedies were applied by his wife who then communicated with the local doctor after seeing that he didn't improve after her treatments. The Doctor (Mr Mountaine) gave no assurance of a likely recovery which proved correct for Mr Balderston who was by this time attended by not only his wife but also his immediate family and a kind neighbour sadly succumbed to his ailment on the morning of December 3rd at the age of 69.
After arriving in Auckland with his wife in early 1859 he was employed by a Mr Lusk on a farm in Mauku and it was during this time they both experienced some hardships relating to rural life in the early days of the colonisation. When the Counties Act came into force, Mr Balderston was elected as the district's first representative to the County Council.
The latter years of his life was spent in domestic quietness with his wife, son and daughters. Information from the NZ Herald 15/12/1892.
Join us on Facebook at the Northland Heritage Group https://www.facebook.com/groups/1109709272401824/
Email Post
Labels: colonisation david balderston early settlers hakaru kaiwaka mangawhai st michaels and all angels hakaru

Klara said…
I adore old walking in old cemeteries (hubby thinks it's morbid ;-). looking at tombstones of people who lived and died in 19th century, I always try to imagine how their lives were. how amazing that you found information about this gentleman.
February 28, 2021 at 6:58 AM