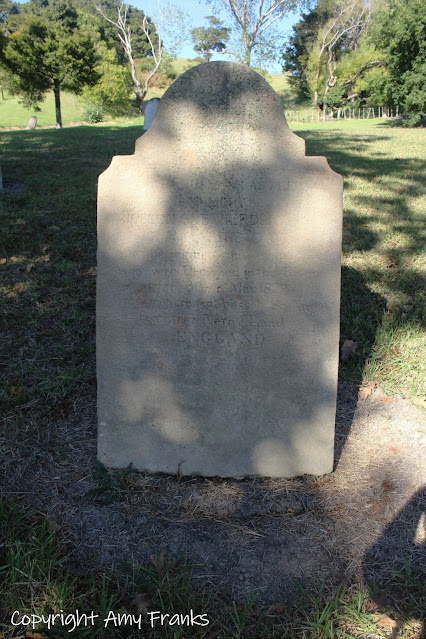 We were out at Horeke again earlier this week exploring the Mangungu Mission Station, previously I hadn't noticed the small cemetery at the bottom of the hill adjacent to the church. In the far corner of the grounds were some very very old graves, this one in particular belongs to a man named Joseph Shepherdson who was born in England around 1800 and who drowned in the Mangamuka River after the boat he was on capsized on the 30th May 1929.  The grave is also in memory of his friend John Harris Davis (the 2nd body that wasn't found).
Some information I found online says:

In May 1829 a cemetery was first added to the settlement when 2 men from the ship "Roselyn Castle" drowned but only 1 body was recovered. The ship's captain requested that he be buried at the Wesleyan settlement and the missionaries were given money to erect a headstone in memory of both sailors. The cemetery was to be the final resting place of missionaries and their families and local residents.

Hels said…
Thank goodness there is a public stone to remember the tragedy. Otherwise the men will be forgotten as soon as the newspapers move onto the next big news item.
March 26, 2021 at 7:40 AM

Billy Blue Eyes said…
Drownings are always sad even sadder when you see kids involved
March 26, 2021 at 9:03 AM