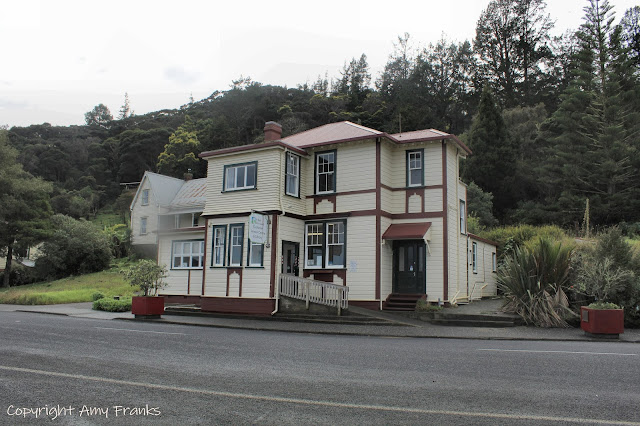 Along the main road of Kaeo is this building which was once the local post office but is now being used by the Far North District Council as a Customer Service Centre and Library.

Constructed in 1911-12, the former Post Office in Kaeo reflects the improvement of postal services and other state facilities in rural communities under the first Liberal Government (1891-1912). The two-storey timber building also forms a relatively well-preserved and uncommonly surviving example of Edwardian Baroque architecture in the Far North. Replacing humbler facilities on the site, it demonstrates shifts from services based in rural houses and stores to purpose-built structures proclaiming government leadership in the provision of postal and related activities. Forming a key local hub for communications and other interaction with the state, the building expanded as services grew, including additions in 1919-20 and the early 1960s. The place has remained an important community facility since closure of the post office during economic liberalisation in the 1980s.

Pre-European settlement in the area included that by Ngāti Uru, who occupied Pohue pā at the eastern entrance to Kaeo from the late 1700s, and cultivated gardens beside the Kaeo River. Following Pākehā arrival in the early nineteenth century, the surrounding land was subject to large-scale timber exploitation. After becoming Kaeo’s first postmaster in 1857, an early European lumberman William Spickman ran one of only four sub-post offices in Northland from his general store. In 1874, his replacement, Richard Gibbs, moved the service to a more centrally located position in the township. In 1888, postmistress Miriam Gibbs transferred the postal business from Gibbs’ store to her adjoining residence - situated on a raised terrace in the rear of the current post office property. Consisting of a one-and-a-half storey family home erected in 1872, this continued to accommodate a post office after purchase of the property by the Post and Telegraph Department in 1903, and until construction of a purpose-built replacement in 1911-12. 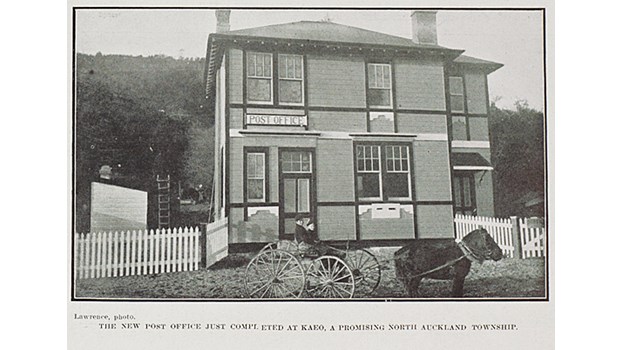 The new structure was significantly larger, reflecting the importance of post offices to rural communities as the first Liberal Government expanded both communications services and other state activities. It was erected during a wider building boom for new post offices in New Zealand between circa 1900 and 1914. Designed under the aegis of Government Architect, John Campbell, it employed the Edwardian Baroque style adopted by Campbell for most government buildings, providing them with a distinctive, collective identity and making connections with the broader use of Baroque for official buildings throughout the British Empire. The building’s timber construction, however, was relatively uncommon for a two-storey post office - reflecting, in part, Northland’s role as a major timber producer. Built by local firm Hare Brothers, it contained postal facilities on the ground floor, including a mail room, public counter and small telegraph room, and accommodation above.

The early importance of postmistresses in Kaeo, and more broadly in rural New Zealand, is reflected in its first occupant, Emily Adams. From 1916, however, it was occupied by a series of postmasters, demonstrating contemporary trends for larger post offices to be placed in the hands of male employees. Improvements to the structure in 1919-20 included a postmaster’s room and larger telephone exchange, created in an identical architectural style. Other additions in the 1940s and 1960s reflect the continued improvements to services and employee accommodation, including at a time when the postmaster played an important community role in the Second World War (1939-45). The post office remained a key centre for local postal and telephone communications, and other important services such as a Savings Bank, until closure in 1989. When the telephone exchange ceased functioning, it was the last to use manual equipment in mainland New Zealand.

Since purchased by the Northland District Council, the place has remained in use as a community asset including as a library and service centre since at least 2012. It forms a notable local landmark, and part of a wider group of places in Kaeo of historical and cultural importance.

Jackie McGuinness said…
I love history like this!
To your question on my post:
Cabbagetown's name derives from the Irish immigrants who moved to the neighbourhood beginning in the late 1840s, said to have been so poor that they grew cabbage in their front yards.[2] Canadian writer Hugh Garner's novel, Cabbagetown, depicted life in the neighbourhood during the Great Depression.
March 13, 2021 at 2:24 AM