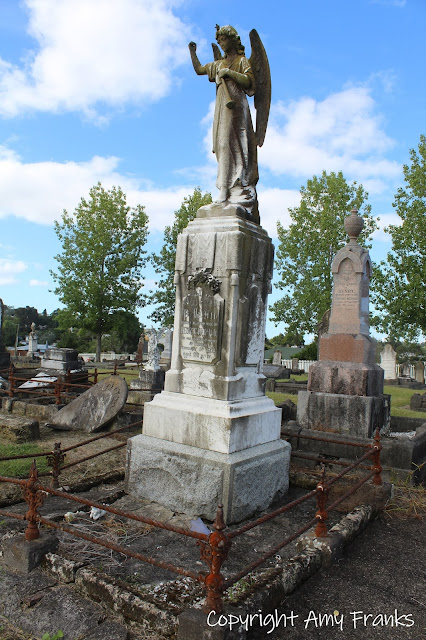 At Kawakawa Cemetery there is this grave with an elaborate sculpture at the top of an angel belonging to a Mrs Bertha Marshall (nee Culley) who was a victim of accidental drowning at Russell on the 5th February 1905.
"A boat containing 6 people capsized in the Bay of Islands near Russell, 3 of the party being drowned. An open sailing boat containing Mr John Culley (of the Kawakawa Coal Mine) and his daughter Miss Culley, Mrs Bertha Marshall, wife of Mr George Marshall, proprietor of the Junction Hotel in Kawakawa. Messrs Gilbert and Frederick Goodhue and Enoch Doel of Taumarere was sailing near the Tapeka Point when it was struck by a sudden squall and capsized. 3 of the party; Mrs Marshall along with Mr and Miss Culley were drowned, the remaining 3 were rescued after being in the water for 3 hours."
- Article from the Auckland Star
Sadly George passed away suddenly in 1907 after being indisposed for 3 days but research does not say from what.
Join us on Facebook at the Northland Heritage Group https://www.facebook.com/groups/1109709272401824/
Email Post
Labels: accidental drownings bertha marshall george marshall junction hotel kawakawa cemetery

Billy Blue Eyes said…
Sad monument to find, I came across one in a churchyard many years ago to two small boys who drowned in the River Thames. It depicted statues of the two of them . Very sad
March 5, 2021 at 11:34 PM